LEELAND Better Word   “The gift of language combined with the gift of song was given to man that he should proclaim the Word of God through music.” — Martin Luther One of the most pervading questions in modern-day Christianity is simple. “What is worship?” Whether we were born-and-bred going to church, or are consumers of the Christian music genre that is now largely-populated by “modern worship” music, or we simply devote the bulk of our time and energy to a certain work, relationship, or…

Better Word, Leeland's first-ever full-length live album, releases today. The worship experience was captured earlier this year during a gathering of fellow worshipers at Christ For The Nations.

Better Word, A Live Album From Leeland, Out On Sept. 13 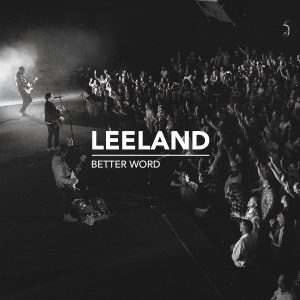 “The gift of language combined with the gift of song was given to man that he should proclaim the Word of God through music.” — Martin Luther

One of the most pervading questions in modern-day Christianity is simple. “What is worship?”

Whether we were born-and-bred going to church, or are consumers of the Christian music genre that is now largely-populated by “modern worship” music, or we simply devote the bulk of our time and energy to a certain work, relationship, or even to ourselves, we all define, or are defined, by worship in some way or another. Truth told, every moment of every day we are consumed by, and so worship, something.

For Leeland, the Grammy-nominated band comprised of founding frontman Leeland Mooring and fellow singer-songwriting worship leader Casey Moore, the thoughtful duo has spent a decade-plus career carefully considering what worship truly means through the medium they know best – music. Having inspired and facilitated the collective cries of musical worship in settings great and small across the world, Mooring and Moore have been afforded a unique front-row vantage point to observe how people’s personal moments of praise shape their everyday perspectives about God, about others, and about themselves.

It’s no wonder then why the band’s eighth release, Better Word, in partnership with Integrity Music, is a full-on live 12-song worship experience, which was captured during an epic gathering of fellow worshipers at Christ For The Nations (CFN) in Dallas, Texas, earlier this year.

BACK TO THE BEGINNING

“Although our genesis as a band was in the Contemporary Christian Music artist stream, we’ve always been local church pastor’s kids,” explains Mooring who spent his childhood traveling from town to town with his parents who ministered music in tandem with traveling evangelists. “Half of the songs on our first studio album came out of intimate youth group worship services in our house or wherever we could meet.”

Originally formatted as a pop/rock outfit readying commercial songs for radio, Leeland released its debut album, Sounds of Melodies, in 2006, a recording that spawned a GRAMMY nomination and multiple Dove Award nods. Mooring explains that the bulk of Leeland’s songs have always been inspired by the communion of worship. “’Tears of the Saints’ came up after a youth prayer service on a Saturday night,” Mooring remembers, “and ‘Carried to the Table’ was after a sermon one of my spiritual fathers preached with the same title. The chorus of ‘How Wonderful’ came from singing to Jesus on my mom and dad’s front lawn late one night after extended meetings. More recently, ‘Lion and the Lamb’ came from a life-changing moment in God’s presence at a friend’s church in Dinuba, California with hundreds of young people and their families.”

One of the church’s newest and most-sung standards, Mooring co-wrote the anthemic “Lion and the Lamb” with worship music mega-writers Brenton Brown and Brian Johnson. The song cemented his personal status as a young veteran in the sphere of modern worship music, further affirming that Leeland as a collective is drawn into crafting songs that court congregations across the globe to worship God through the act of singing – and singing together.

As for the writing and accumulation of songs for Better Word, an album marked by songwriting penmanship of both Mooring and Moore, Mooring explains, “We usually don’t start seeing a theme emerge until we’re in that mode of finishing songs, but right in the thick of Better Word we found that all of these songs weren’t trying to be anything. They were simple, easy to sing with a lot of space to think about what you just sang, and the lyrical themes were either about Jesus and His goodness, or songs of faith that challenge us to lift our eyes off of our circumstances and onto the face of Jesus. I really feel like it’s a returning back to the things Leeland did at first.”

Answering such questions as to why a live album and why now, Mooring admits, “God’s timing is mysterious, but I do believe years of having incredible moments in churches ‘live’ with the body of Christ led us to this moment. It was definitely a bigger step of faith pressing record on one night, and then putting it in God’s hands!”

As musicians who are consistently engaging in the action of leading others in worship, Leeland shares that singing worship to God is more than a sweet gesture of praise. It is a significant, albeit mysterious, spiritual exchange with our Creator.

“My buddy says it best, ‘Your voice is attached to your soul.’ So when we lift audible sounds, our testimonies, trials, victories, and secret histories with Jesus, fill the atmosphere. That’s why it’s important not to sing by feeling but by faith,” says Mooring, recalling the thoughts of fellow Integrity Music artist and friend, Noel Robinson. Robinson’s impassioned guest leadership on “Rain On Me” provides one of Better Word’s anchor musical moments, and who, as a British-born worship leader with an African-Caribbean heritage, serves as a reminder that worshipping God is a universal expression without border or boundary.

“It’s easy to sing about how we feel or what we see in the natural,” Mooring continues. “If we only worshipped when we felt like it, we’d mostly be silent. That’s why the Bible says don’t walk by feelings, nor sight, but by faith. But not blind faith – faith that’s founded on all the promises of God in Christ Jesus that are, ‘Yes and Amen.’ (2 Corinthians 1:20) As we sing the truth and life in Jesus, the truth starts to renew our minds and change the way we think, which changes the way that we live.”

A beautifully orchestrated setlist supported by in-the-pocket musicianship and spiritually sensitive spontaneous moments of worship, Better Word gets initiated by “Inhabit,” the record’s prelude featuring a cacophony of live voices chanting a Psalm 22-inspired lyric in a sort of sung declarative surrender, “Our praise becomes Your house … You inhabit the praises of Your people.”

“Speaking about the Holy Spirit, Jesus said, ‘You know Him for He’s with you, but He will be in you,’” Mooring shares, reciting Jesus’ words to the disciples in John 14:16 as the backbone to the record’s first cut. “God’s purpose for us in Christ is that after we received the washing of His cleansing blood, now we become houses of prayer, houses of worship and intimacy, where we can actually live in the atmosphere of the presence of God all day long and allow the overflow of His goodness to touch the world around us which leads us into repentance and change.”

As a recorded project, Better Word certainly captures the essence of the power accessible to believers in the throes of musical worship. And as young veterans in the world of modern worship music, Better Word is bound to further cement Leeland as a primary musical worship leader in the world’s continually progressing modern worship music movement. But for Mooring, worship is much more than a lyric, or a song, or even the gathering and singing of the saints. It’s personal. And it’s life-changing.

“Worship is a combination of alone time with Jesus that is planned, and the not so planned moments – all of the in-between times in the day when I’m reminding myself to fix my heart and mind on Him,” he concludes. “It’s incredible how fast singing, saying, and thinking on Him so quickly changes my attitude and perspective.”