Sometimes it’s in the darkest of nights where we discover the brightest light. The road ahead might be hidden, but our vision can still be crystal clear. This strange paradox is what worship leader David Binion experienced two years ago when a corneal ulcer in his left eye threatened to take his sight forever. After six weeks of aggressive medication, doctors recommended a cornea transplant. David’s future was uncertain, and his physical vision was nearly gone; yet his spiritual vision was 20/20. So he…

Integrity Music released "Glory of Eden" by David and Nicole Binion. Recorded at TBN Studios in Dallas, this is the eighth career album to release from the team and their third with Integrity Music. 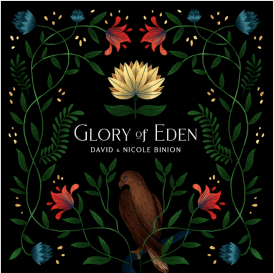 Sometimes it’s in the darkest of nights where we discover the brightest light. The road ahead might be hidden, but our vision can still be crystal clear. This strange paradox is what worship leader David Binion experienced two years ago when a corneal ulcer in his left eye threatened to take his sight forever. After six weeks of aggressive medication, doctors recommended a cornea transplant. David’s future was uncertain, and his physical vision was nearly gone; yet his spiritual vision was 20/20. So he did the thing that comes most naturally to him: He wrote it all down. What he didn’t know at the time was that those raw journal entries would form the foundation for what would later become Glory of Eden (Integrity Music), the stunning new project from David and Nicole Binion.

When Christmas 2017 arrived, David couldn’t even bear to watch the lights twinkle on the tree in the family room. Even the dim light from a small lamp proved painful, so he spent much of the holiday in a dark room, shades drawn, special glasses shielding his eyes. It was enough to make even the most joyful person depressed. Every day, his condition was getting alarmingly worse, and he could do nothing but sit with his eyes closed for hours at a time. It was excruciating. “It was a scary time. We were doing everything we could with the doctors to treat it, then also just believing that God would do a miracle and heal it,” his wife, Nicole, recalls. “The doctors were unsure if the transplant would be successful, but God was so faithful to bring David through the surgery successfully; and we began to get our normal life back again.”

One good thing that came from this period of literal darkness? Songs. Lots of them. “It was like God was saying, ‘The devil’s going to try to take your vision. I’m really going to give you vision now,’” David says. “I wouldn’t trade the experience I’ve had in the presence of God for the price that it cost me.”

The presence of God—it’s a theme that permeates everything David and Nicole put their hand to. So much so, in fact, that they founded a church—Dwell Church in Dallas—in order to create space for it. They intentionally make it a priority in their home with their three children; and of course, they sing about it. Creating space for the presence of God quickly became the impetus for the couple’s Integrity Music debut, Dwell: A Live Worship Experience and 2019’s Dwell: Christmas (Live).

“We do what we do so we can see people transformed in the presence of God,” David affirms. “The presence of God has a way of just eliminating all of the conflict and bringing healing. That’s really what we’re after. We’re passionate about this, because we have experienced the transformation for ourselves. You can only lead someone where you’ve been.”

In his darkest moment, David entertained the presence of the Father like never before—an experience he can only describe as the “glory of Eden”—the birthplace of man, made in the image of God. A place of perfect harmony and tranquility, bursting with beauty and truth. Man and woman—fully known, fully loved. Ever since the fall, humanity has been striving to get back to that garden. And with Glory of Eden, David and Nicole hope to bring a small piece of heaven back to earth.

“We want to create that place in worship where people can walk with God,” David shares. “The album starts as a blank canvas, and as you sing the lyrics, people can see the picture come to life.”

Much of the Binions’ music is an overflow of the worship resonating at Dwell. “Living Proof,” featuring Steffany Gretzinger, was road-tested at their church long before they recorded it. Written in time for Easter 2019, the song took on a life all its own. “Our church went crazy. They just loved it,” Nicole says of the first Sunday they led the robust anthem of praise. “You try out a song, and you’re like, Is this going to hit well with people? And it was so powerful.”

David penned the track with Mitch Wong, a member of Planetshakers. Mitch played a pivotal role in the creation of Glory of Eden, writing the majority of the album with David at all hours of the day and night—much of their songwriting taking place over Skype because Mitch lives in Melbourne, Australia.

Standout track “Blessed Be The Name” was another selection Mitch helped craft. It started like many of the Binions’ songs do—as a spontaneous moment in worship. After David began repeatedly singing the chorus over his congregation like a prayer, he came home; and he and Mitch finished the song in literally 10 minutes via FaceTime.

“A waterfall is really kind of the strength of rivers in their greatest capacity,” David offers. “This is the kind of move of God I want. I want it all.” The brooding, Gospel-flavored track finds its genesis in Psalm 42:7. “I want to say we didn’t write the song,” he surmises. “The song wrote us, because it just fell out of our mouths.”

“Here Comes The Glory” was birthed out of another spontaneous moment as David and Nicole led worship at a conference. However, the final version proved more elusive. It might not have come as swiftly, but the song became a testament to the art of collaboration. It was literally penned line by line as the Binions wrote in different cities with everyone from Leeland Mooring and Israel Houghton to William McDowell. “It was just many pieces of the puzzle causing this whole idea to come to life—like a mosaic,” David explains. “It paints part of the tapestry of this album.”

Although the whole of Glory of Eden was derived from six weeks of near blindness for David, “Faith Sees” is perhaps the most obvious song birthed from the trial. The lyric claims: I believe in miracles / I can see a miracle / Faith sees a miracle looking for a home.”

“There’s what we see in the natural, and then there’s what faith sees,” David says of the song, which also features Todd Dulaney. “There are orphaned miracles everywhere looking for a home.”

Then there’s cornerstone track “Bringing Back The Ark”—a tribute to King David and his hunger for the presence of Christ—featuring the Binions’ longtime friend, William McDowell. “That song is a big part of our story and our church’s story—why we even planted Dwell Church and why we felt God calling us to do everything we’re doing in this season. It’s all about the presence of God,” Nicole shares. “It’s so vitally important that we don’t just go through the motions in a worship service, but that we focus and we set our eyes on Jesus.”

It’s a fitting sentiment considering that whether in darkness or light, David and Nicole Binion have their eyes fixed on Jesus, walking hand-in-hand with the Father. Their music is proof that Eden still exists. Sometimes, it just takes the right perspective to see it.

“I think our heart is always for people to walk away from an album or worship experience that we have led with a deeper appreciation for the presence of God,” Nicole says. “We hope they discover more of God than they have experienced before and that, ultimately, they walk away looking more like Jesus.”