Oftentimes it’s the simplest messages that dig the deepest – melodies and lyrics written for and sung back to the Lord, carving a space into the collective heart of the church. Paul Baloche, songwriter, and artist behind many church standards including “Open The Eyes of My Heart,” “Your Name,” and “Our God Saves,” has penned more than 400 published songs (and just as many unpublished) over his 20+ year career, including 37 songs in the US CCLI Top 2000, which serves more than 250,000…

Integrity Music announces Behold Him, the latest offering from Paul Baloche, on February 28. In his 25-year career, Behold Him is Baloche's 22nd album! 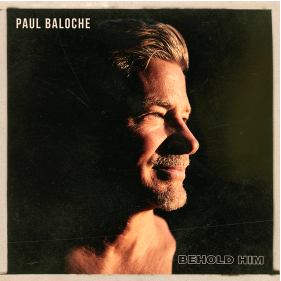 Oftentimes it’s the simplest messages that dig the deepest – melodies and lyrics written for and sung back to the Lord, carving a space into the collective heart of the church. Paul Baloche, songwriter, and artist behind many church standards including “Open The Eyes of My Heart,” “Your Name,” and “Our God Saves,” has penned more than 400 published songs (and just as many unpublished) over his 20+ year career, including 37 songs in the US CCLI Top 2000, which serves more than 250,000 churches worldwide. His songs give voice and clarity to worshipful messages, allowing an audience of many to sing as one about God’s divine character and unending love.

Baloche began his songwriting career in Texas where he led a congregation as the worship pastor for 25 years. It was a system that worked for him, writing and developing songs, leading worship, raising his family, a full life of community, artistry, and devotion to his faith. A few years ago, when Baloche and his wife made a radical life change and moved to New York City to be closer in proximity to their adult children, the system he’d relied on for so many years broke down. The shift in location and, even more, the shift in culture, altered Baloche in ways he hadn’t anticipated. No longer did he have the daily input and encouragement of his church, his community, or old friends who’d been there through the hills and valleys of his life. Life in New York City, while a welcomed new step, was radically different than the life he’d left behind. And while the challenges were many, the biggest challenge was loneliness.

“You walk down the street and everyone has their headphones on, in their own world and moving so fast. It’s easy to find yourself very alone in such a crowded place,” Baloche shares. “But even in the overwhelming din of the city, there was a still, small voice from the Lord that managed to get through the cacophony of voices in my mind and my daily routine. He said, ‘Paul, come away, get quiet, get alone with me.’”

Turns out, the answer to that still, small voice was a windowless elevator room at the top of his apartment building.

“If you climb the stairwell to the very top, there’s a room filled with all the machinery that operates the elevator. Nobody ever goes up there. It’s loud and doesn’t smell great and has blank cinderblock walls and no windows. But in New York City, finding a place where you can be alone and be uninhibited is a challenge. So, I began to go up there, to the elevator room, with my guitar and my Bible, to be alone and sing to the Lord.”

For Baloche, those times alone with God in the elevator room were birthed out of a certain desperation. He wasn’t working on songs for his next album, wasn’t trying to write a new worship standard. He was there to press pause, be completely open and raw, and sing out his aching heart and prayers intimately to God.

“I needed to go and be alone with God and feel the transition I was going through in my soul. I was missing my friends in Texas, feeling disconnected from community, feeling the loss of everything we left behind. I wondered if maybe my time of fruitfulness was over, if maybe I’d never record music again. It was a very vulnerable time for me, just calling out to God in my sadness.”

Through dedicated time and his own willingness to be as honest with God as possible, Baloche began to find his footing again. From whispered prayers and tearful moments, songs began to flow, authentic vulnerability lending itself to new expressions of love for a Savior who stays close, even in the loneliest of times. The result is Behold Him, an album overflowing with reverence, thankfulness, and appreciation for God’s provision and presence. Each song feels deeply personal while also resonating with a larger audience, the closeness of humanity’s need for a Savior mixed with praise for all the things He’s done and will continue to do. It’s an album for One as much as it’s an album for anyone.

Title track “Behold Him,” based on Psalm 41, has already broken into the global church at a blistering speed and is especially meaningful for Baloche. It’s a response to the chaotic noise of today’s culture, the frenetic energy of endless to-do lists and expectations. It’s a message that’s perhaps been heard before, but one that bears repeating: Be still and behold Him.

“Life moves lightning-fast these days,” Baloche says. “The things we process in a single day feel like a hundred times more than our grandparents had to process in an entire year. Everyone is moving, has an agenda, has something on their mind, trying to get to the next thing. The message of this song is not just to be still, but also to know Him, that He is God. It’s taking Him in with your mind, your soul, your body, your spirit and beholding the wonder of the Lord.”

For Baloche, beholding is also about surrendering the outcome and learning to trust. It’s a theme close to his heart and one he continues to strive for, daily quieting his soul and turning his eyes to the Lord. That singular focus is felt most on songs like “I Love You (Always),” a moving track that lists the attributes of God as a personal love letter and “A Million Years,” a song about hoping for heaven and the joy of seeing Jesus face to face.

“The best worship songs feel like you’re singing an authentic prayer to the Lord,” says Baloche. “That’s one of my filters when I’m writing a song. I ask myself, does this feel like an authentic prayer to the Lord? If I’m going to lead with integrity, I have to carve out time to be alone with God and worship him privately. I want my public leading to come from a private practice.”

One of the benefits of writing and recording music for so many years is the relationships Baloche has forged, many of which emerge in Behold Him.

“One of the greatest treasures to me, when I look back at writing songs, recording albums, and doing ministry worldwide, are the friendships I’ve made. This album is a massive reflection of those relationships. The opportunity to write and collaborate with people like Kim Walker-Smith (Jesus Culture), Kari Jobe, Matt Redman, Chris Brown and Steven Furtick (Elevation Worship), Leslie Jordan (All Sons and Daughters), Amanda Cook, Mitch Wong, Mia Fieldes, Jason Ingram and Ben Cantalon – these are all true friendships. We’ve written songs together, ministered together. Many of these relationships are like family.”

In a way, moving to New York City and away from his longtime community in Texas opened Baloche’s eyes to the global community he’s fostered throughout his career. Behold Him is a reflection of years of working with the worldwide community of worshippers. After fourteen albums, it still comes back to relationships, with people, and with the Lord. In losing, Baloche found so much more, including a richer devotion to his faith and a longing to be still, to know, to behold Him.