Posted at 12:33h in General, News by MergePR

NASHVILLE, TENN. (JULY 01, 2022) California-bred rock and roll band Gable Price & Friends (The Boys) have amassed a large following since their crowd-funded start in 2018. They have joined the Capitol Christian Music Group family of artists and are re-releasing their well-received released EP If I’m Being Honest on the label with two new live versions added. The updated EP is available today here along with a music video for “I Need You.”

“Gable Price & Friends are an incredible rock and roll band,” share Brad O’Donnell (CCMG, Co-President) and Hudson Plachy (CCMG, Co-President) about the new partnership. “With their high energy and personalities, you can’t help but be a fan. We are thrilled that they have found their home here at Capitol CMG and honored to partner with them. We can’t wait to see everything the future holds for this talented band.”

The EP was originally released in 2021 independently and has received nearly three million streams on Spotify and Apple Music. Their independent debut album, Fractioned Heart, was released in 2020 and has more than 10 million global streams. Growing their fanbase since their start, Gable Price and Friends currently has more than 111K Spotify monthly listeners with more than 25K followers. The band just wrapped up as direct support for the King’s Kaleidoscope’s Club tour. They will be opening up for select dates for For King & Country followed by joining John Mark McMillan’s West Coast tour. The Boys are also gearing up for the creation of their new album. More information forthcoming on the new music. 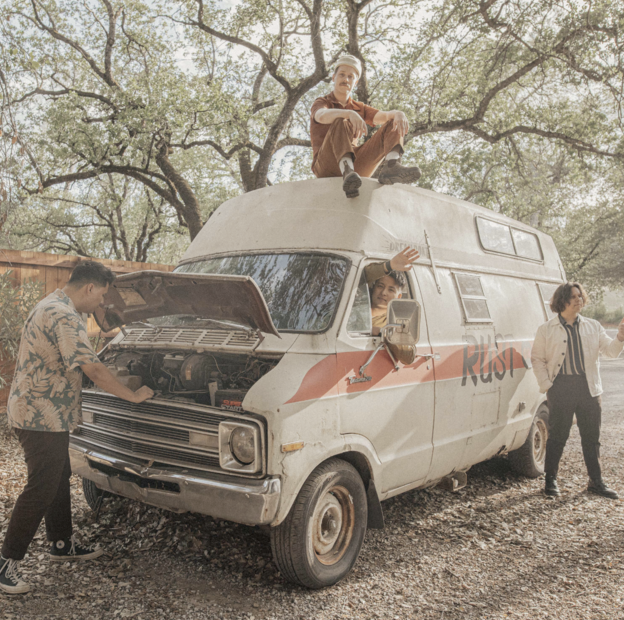 ABOUT GABLE PRICE AND FRIENDS: Gable Price and Friends is a rock and roll band composed of a few friends with a whole lot of damage to do. They are known for their high-energy music that makes you get speeding tickets, lyricism that simultaneously cuts you and comforts you, and their ability to provide a euphoric live show experience. Gable Price and Friends are just getting started.  Halfway between Sacramento, and the Oregon Border, Gable Price and Friends formed in 2018, in a small town called Redding (Now known as “Redding: the home of the boyyyys”). Bored and feeling stuck during his first year of school, frontman Gable Price asked guitarist Adam Elizararraz, and drummer Daniel Vargas to join him in making a 4 song EP that they demo’d in his 1977 Camper van: “The Dreamboat.” They crowd-funded an astonishing $1000 and wildly underpaid some friends, and Gable Price and Friends was born. In the Summer of 2019, GP&F added guitarist Cameron Pablo to the band, and began making their debut full-length album Fractioned Heart. Met with an overwhelmingly positive response, the boys hit the ground running even more. Gable Price and Friends released their latest EP If I’m Being Honest in the fall of 2021, featuring the hit song “I Need You,” and fan-favorite “50 MG,” this has been their best-received release to date.  The Boys are gearing up for the creation of their next album and getting ready to hit the road. Keep your eyes peeled, and remember to be a good friend.